﻿(Chef  Hardette Harris and one of her recipes are featured on page 127 of  Adrian's book.)

﻿﻿Soul Food: The Surprising Story of an American Cuisine One Plate at a Time, Adrian Miller (The University of North Carolina Press)*  has been nominated in the Book Awards category under Reference and Scholarship.

One of the most enriching and best-executed events I can recall having been to in a very long time! Amazing food, incredible history lesson...what a night! ~ Christopher L. Jay, Public Relations and Social Media Manager at Shreveport-Bossier Convention & Tourist Bureau

Such a fantastic evening! Great food, great people, and great conversation! Thanks for having the event. ~ Mary Lois White, Associate Professor at Louisiana State University in Shreveport

Hope it is repeated next year. But not lose the primary goal. We must continue effort to meet the challenge. ~ Mrs. Thelda Harris, Minden Resident & Civic Contributor

The Dream Dinner is a registered Points of Light Sunday Supper, an event dedicated to service and dialogue in keeping Dr. King's dream alive.

Inspired by Dr. King’s vision of people of diverse backgrounds interacting on personal levels, America’s Sunday Supper encourages people to share a meal and discuss issues that affect their communities, to increase racial and cultural understanding. 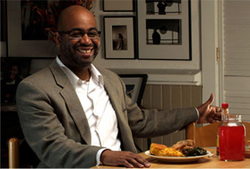 Adrian Miller, who describes himself as “a curious guy with an appetite,” has held quite a few distinguished titles. A graduate of Stanford University and Georgetown Law, Miller practiced law in Colorado before becoming a special assistant to President Bill Clinton and Deputy Director of the President’s Initiative for One America. In 2007, he became Deputy Legislative Director for Colorado Governor Bill Ritter, Jr. Somewhere along the way, he also became America’s leading authority on the topic of soul food. [Read the rest HERE.]